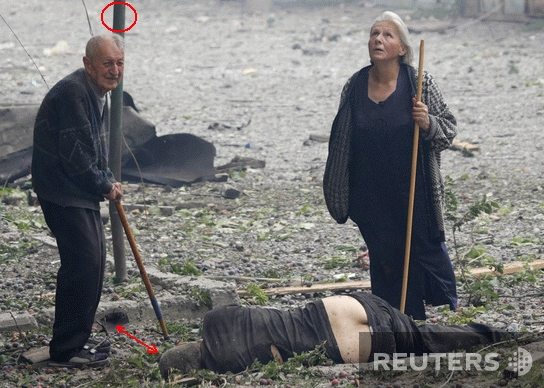 Tlaxcala published these evidence weeks ago. It is time to realize the dimension of effect on our minds by modern media warfare.
On September 1 the European Union is going to meet in Brussell to debate sanctions against Russia who has been attacked by NATO-backed Georgia. On September 2 US Vice President Dick Cheney will arrive in Georgia to support this President Saakashvili who has started all this.

May the worldwide public not sleep this time.

"A few days after these pictures had been analyzed by the Russian blog "Russia Insider" and the Serbian blog "Byzantine blog" as fake ones, staged by the photographer David Mdzinarishvili, some of them have been simply removed from the website of "Reuters". Here the deconstruction made by "Byzantine blog".

This (upper) photo was first published by the Reuters as an image of a "dead woman being carried from the town of Gori". But this "dead woman", incredibly, is clutching the nurse's arm.

This man exhibiting rage and grief happens to sit in the exact same place where the earlier picture was taken: the same pile of garbage is behind his back and scraps of metal from the picture of a "dead" woman being 'rescued' are lying around like in the earlier photo -- plus some, additional, unidentified scraps of metal. What are these supposed to represent?

The caption Reuters gave to this photo is "Georgians stand next to the body of their son in the town of Gori". The woman is looking up towards the sky from where, presumably, death had stricken "her son".

But for the purposes of this photo the body of the "son" has been obviously moved quite a bit away from the curb. This was clearly not done in order to cover up the naked parts of the dead man's body, nor to allow some measure of dignity to the dead. Was it done for the light? (One should challenge Reuters to find a mother -- any mother -- who would allow the body of her child to be dragged through dirt half naked like this, while she is taking instructions from a photographer where to stand, where to look and what to do next)."

Then there are a few more photos of the male actor shown up above in the same area like the "dead woman".

And then, then there is a further actor, a female, who arrived in time on a bigger film set in Tbilisi.

And then, just like in Iraq (but only in the beginning), some supernumeraries (formerly called "people") would like to say "Thank you, Mr.Bush".

And of course, we also want to thank the academy...

You did a great job..